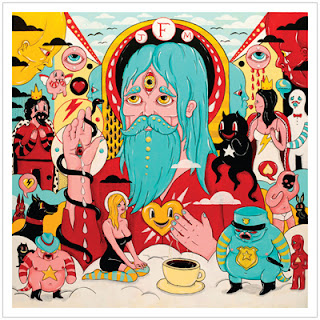 Ok...one look at this cover and you're probably thinking what I thought. "Wow. This is going to be one messed up, tripped out, psychedelic trip into the unknown." If you're thinking that right now...stop, because you are wrong. Father John Misty is nothing of the sort nor does he play that kind of music. He’s so the opposite of all that I don't even think he's a Father. However, he is a very interesting singer/songwriter who obviously comes from a completely different direction than most of his peers.

His album Fear Fun is a swooning, crooning, heartbreaking trawl through his musical psyche. It's fascinating stuff that alternates between sounding like Chris Isaak, Lyle Lovett, and country ballads. With a bit of twang, long drawn out notes and a musical direction that would make someone like David Lynch think this guy is awesome Father John Misty is a unique talent. Fear Fun isn't necessarily a feel good hit, but it is the sort of album that even if you don't like the genre you can help but sit there and just listen to what he's done.

Fear Fun is like a folkified, countrified, broken hearted lounge singer's journey into depression. It's an intimate, rustic, lonely record that long's to feel the arms of someone around it but never quite gets to. It’s quiet, unobtrusive, and looking for attention. With that being said it's thoroughly enjoyable stuff even if it's a bit too twanged out for me. Countrification and twanginess aside you should give praise to Father John Misty for he preaches the gospel of love unlike anybody you'll ever hear in your life.
Posted by Paul POP! at 2:20 PM