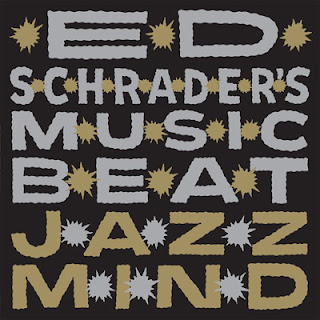 Ed Schraeder's Music Beat clearly marches to the beat of it's own drum or a really different drummer. Their latest album Jazz Mind is a demented excursion into the world of nightmares coming to life, of minimalism gone wrong, of migraines set to music and the sound of the wheels coming off all at the same time. Ed Schrader's Music Beat have created one of the more unusual and downtrodden records you're likely to ever hear and it's the sort of thing that makes Joy Division sound like happy go lucky guys.

Jazz Mind sounds like it was recorded in the abyss on like a five dollar budget and sounds as though the whole band and recording are about to fall apart. It's ramshackle, lo-fi, and sounds like it was edited with duct tape but that's half of this thing's charm believe it or not. There's absolutely no concern for quality here because there is none. It's crazy stuff that takes a minimalist approach but then thrashes it about crushing everything within a mosh pit. It's noisy, weird, and really not all the great. It is true punk rock that's dark, out there, and as raw as sushi.

Intriguingly weird and disturbingly bad in a good way, Ed Schrader's Music Beat clearly knows how to make a racket and make it they do over the course of twenty minutes. While the Music Beat might have a Jazz Mind there's nothing at all about this record that would tip you off to that. This is punk rock, raw and furious and without a care in the world. If you like the sound of paranoia and a psychotic attack set to music you'll find Jazz Mind an indispensible addition to your collection.