These Guys Are Brave Chandeliers 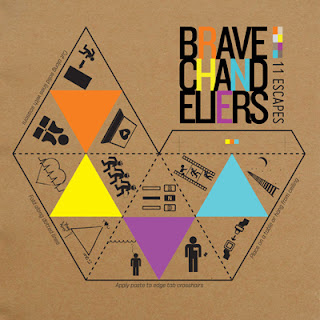 Quitting your job in the middle of the nation's second worst economic climate is probably not the best idea in the world, but that's exactly what Nick Drum and Jon McNeill did. Why did they do it? Well to purse a life in rock and roll which of course, as we all know, is the wisest of career choices. But they made that choice and after just one jam session together the guys formed Brave Chandeliers. The rest as they say is history...much like their 401(k)'s.

Anyway, Brave Chandeliers consider themselves a soulful power pop band but in all honesty I'm kind of struggling with that description. While you can most definitely hear elements of Elvis Costello and even Squeeze pulsating through the songs on their album 11 Escapes the band seem a bit more middle of the road rock than anything else. They're excellent at what they do, for a lawyer and an ethnographer these guys have tapped into their inner rock gods and written a series of songs that are impressive. Switching off between soulful ballads and mid-paced rockers Brave Chandeliers dish out catchy songs as if they worked in a soup kitchen. They just keep coming and coming on 11 Escapes and they don't seem to want to stop which if you like this sort of rock and roll is perfection.

Life is all about choices and some of those choices are risky. To say that Nick and Jon didn't take a giant leap in pursuing their rock and roll dreams is insane. These guys put it all on the line and broke away to pursue the freedom of rock and roll. Thankfully, somehow, some way they tapped into a fine songwriting skill set and delivered a pretty good record. 11 Escapes is the sort of thing that could give radio fits and the mainstream rock community a panic attack...and if not they'll just sue you and then write about the cultural significance of it.