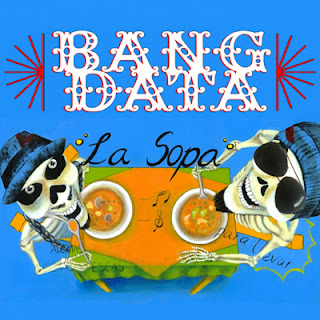 Similar to Bay Area veterans, Bayonics, Bang Data create music that's so unbound by genre's or pigeon holes it's hard to even come up with a way to describe them. If you can imagine a giant musical melting pot of sounds and ideas you kind of have an idea of where Bang Data are coming from. Their album La Sopa is a chaotic cocktail of international flavors that will keep you guessing, keep your ears perked up, and your feet doing all kinds of things. You don't get much more original than these guys and that's their strength that they use in every song.

Bang Data are intriguing because they refuse to be placed into neat musical containers. Their sound is highly influenced by classic Latin sounds but in addition the band manage to use Baille funk, moombahton, reggaeton, hip hop, metal, rhythm and blues, pure pop and just about everything else. La Sopa is a true mish mash of sounds and an amalgamation of ideas that when pieced together work like a charm. It's frenzied, energetic, groove oriented stuff that never backs down and it’s good stuff.

La Sopa is a reflection of San Francisco's diversity and pulse. With distorted guitars, synthesizers, deep grooves, horns, English and Spanish lyrics, massive pop hooks and anything else they could find Bang Data consistently throw you curve balls through La Sopa. One minute the band will be knee deep in a radio friendly pop tune and then the next they'll turn it up to eleven and just go insane. This is why La Sopa is entertaining...there's not an ounce of predictability to it.

With a melting pot of sounds and ideas Bang Data are a modern day reflection of what America is and will become...a diverse never ending sea of ideas and cultures all standing next to each other in harmony. With a bilingual approach and a multi-cultural feel La Sopa is a little bit of internationality in your living room or your ear buds and that's never a bad thing. So take a trip with Bang Data, enjoy the future and while you're at it have a bowl of soup.
Posted by Paul POP! at 8:10 AM