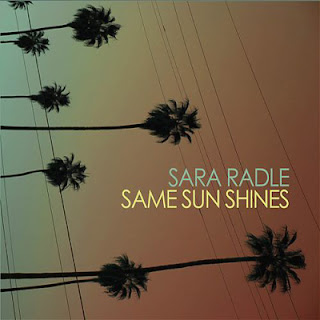 Sara Radle's album Same Sun Shines is a rather good folk pop album similar to a long line of folk pop alternative singer songwriters that were popular in the 90’s. If you can imagine Kristen Hirsh or Julianna Hatfield in their solo project prime you can kind of put yourself right in the middle of Radle's songs. Her songs are poppy, bright, and for the most part breezy and carefree. There's a nice 90's element here and the songs almost sound like they came straight out of the 1993 CMJ charts.

Same Sun Shines is far more than an album with a girl and her guitar. Heck there's so much pop going on here that at times it almost sounds like the guitar solos are played on kazoos. This is cute stuff that makes you want to give Sara Radle a hug. While I generally don't like singer-songwriter albums (as you undoubtedly know) this has enough of that 90's throwback feel to it that I found myself enjoying this record. The songs, even at their slowest, are still enthralling enough to keep you glued to your ear buds and when Sara gets a bit jumpy she's energetic and truly at her best.

Like a long lost record from when alternative broke, this is an edgy, emotional, and slightly rebellious affair. Same Sun Shines is packed with bits and bobs of spikiness, Veruca Salt like vocals, and adorable melodies you won't soon forget. Sara Radle is a singer songwriter it's ok to like and like her you should. Oh, and her cover of "Mamas Don't Let Your Babies Grow Up To Be Cowboys," is worth the price of the album alone; seriously.
Posted by Paul POP! at 3:31 PM