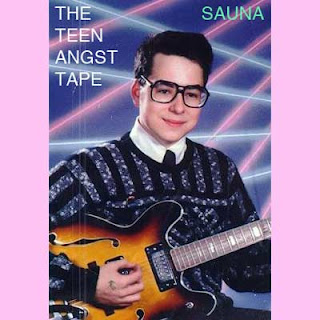 Sauna are a young band from Denver, Colorado and by young I mean really young. How young? Well Sauna are a bunch of teenagers who somehow despite curfews and school managed to come together and create one heck of a little indie pop band. These kids are literally straight out of high school and have been thrust forward into the public spotlight thanks to the strength of their appropriately titled Teen Angst Tape.

Taking surf rock, twee pop, and jangly indie and giving it a bit of a Rocky Mountain High Sauna create music that's shy, shuffly, and so young at heart it should have a curfew. Teen Angst Tape at times sounds like a Dum Dum Girls collaboration with the Beat Happening recorded in Calvin Johnson's garage. It is fantastic youthful and exuberant stuff and Sauna have done a fantastic job of creating retro-tinged indie pop that's sounds far older than the band actually is. This is fun stuff despite the obvious youthful slant on angst, longing, and frustration.

Teen Angst Tape is a short and sweet introduction to one of the most promising bands around. The only problem with all that is, Sauna are so young and so much of their life has yet to really start...how long will they be around for? College could very well see the end of this group before they even release another record. Here's hoping they stick together because it would be fun to watch Sauna grow up with a clutch of albums and hits underneath their arms. Until then revel in their Teen Angst Tape and be glad you’re not in high school anymore!
Posted by Paul POP! at 1:54 PM

Email ThisBlogThis!Share to TwitterShare to FacebookShare to Pinterest
Labels: sauna