The Sugarman Three Are What The World Needs Now 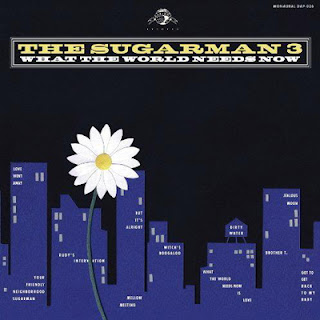 After a ten year hiatus that sounds more like a forty year one, The Sugarman Three apparently did not get the memo that we're now in the 21st century. Thank God. Sounding like a long lost Booker T and the MG's record, What The World Needs Now is a brilliant throwback to a time when instrumental records of all your favorites were just as good as the vocal versions. Crossing rock and roll as well as soul borders, The Sugarman Three crank up their Hammond organ, put on their suits and rock the heck out.

What The World Needs Now is exactly that...what we need right now. This is the classic 60's sound with so many classic 60's songs reworked for instrumental versions it's like being stuck in the best elevator on the planet. From The Standell to "But It's Alright," to their material the Hammond fueled grooves flow like an endless waterfall of soul. The songs are arranged to perfection played stupendously well and all have unique flourishes which make them brilliant. From horns blaring to hand claps to deep grooves and everything in between it's all here and it's dressed up to the nines and ready to dance. This is a Mod party soundtrack that would blow Paul Weller's mind.

It might be 2012, but in the minds of The Sugarman Three it is still 1968 and Motown and Stax rule the world. What The World Needs Now proves that. It's an absolutely amazing record of instrumental tunes that would make Booker T & The MG's proud. From stunning covers to their own original tunes, The Sugarman Three are so authentic you might wonder if they're Timelords or not. What The World Needs Now is an essential record for anyone who likes classic soul, rhythm and blues, or Hammond organ grooves. If the 60's were the 10's this would be the soundtrack.
Posted by Paul POP! at 3:17 PM

Email ThisBlogThis!Share to TwitterShare to FacebookShare to Pinterest
Labels: the sugarman three