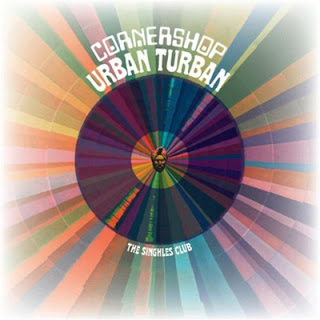 Cornershop have put out so many albums under so many names and have done so many projects over the last fifteen years I've just about lost track of them all. The one consistent thing that has remained is the band itself, who still to this day are recording brilliant funky ethno tinged pop that's adventurous, groovy, and ahead of the curve. It's no different on their latest album Urban Turban.

This out of the ordinary and empirical record is like a walk through Cornershop front man's Tjinder Singh's head. Sound and ideas are everywhere and everything is a source of musical inspiration. The littlest things can be made into something cool and that's exactly what Cornership do on Urban Turban. Consisting of eleven different vocalists ranging from the Castle Hill Primary School Choir to Kay Kwong to Bollywood vocals from Amar and everything in between Cornershop tackle it all with finesse and passion. This is an awesome record that's far from stagnant and old; Born For The Seventh Time part 6 this is not. Oh no, this is an enterprising record that mixes indie pop, funk, hip hop, electro, Bollywood with such ease and Cornershop blur the lines so well that it's hard to find them anywhere on this album.

Urban Turban is a brilliant record that shows Cornershop to be as fresh today as they were on a Brimful of Asha. The songs are creative and catchy and Tjinder still has the knack for writing ridiculously good pop songs that cross genres and borders as if they never existed. Easily one of my faves of 2012, Cornershop continue to be one of my perpetual top 25 groups of all time.
Posted by Paul POP! at 3:54 PM

Email ThisBlogThis!Share to TwitterShare to FacebookShare to Pinterest
Labels: cornershop