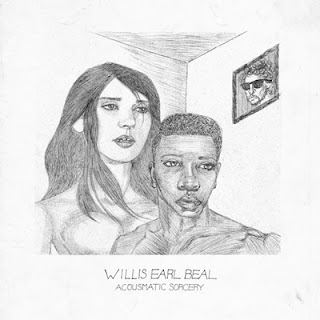 Willis Earl Beal's debut album Acousmatic Sorcery is an interesting study of dedication and self sacrifice to one's art. Having shown up in Albuquerque, New Mexico without much of anything, Willis Earl Beal began singing tunes to cope with his situation. While coping he recorded several of the songs he wrote into a cassette based karaoke machine, utilizing whatever instruments he could find, and a $20 microphone. While far from the pro-tools productions of today those recordings became Acousmatic Sorcery.

Hardly produced or even half sounding good, Acousmatic Sorcery is an album composed of intimate recordings of a man just trying to get by. The recordings, as could be expected, are exposed, tinny, and sound like they were recorded in a basement or subway...it's not the best sounding thing out there but there's an effort being made and you have to respect it.There's a level of honesty, purity, and heart in these songs that's beyond admirable. It's all very minimal sounding stuff that really isn't all that great but shows the honest potential of Beal. It's like a series of live busking recordings put to vinyl and paints a portrait of an artist struggling to survive by any means necessary.

If you were to strip away all the gloss, production, tricks, and cleaning up of most records that's where you'd find Willis Earl Beal's songs. They're untidy, unorganized and pure. Not necessarily catchy, or even all that good it's the sort of thing that you have to respect because of the story behind it. This was an escape, a way to cope, and something done using what resources were available and when you look at this way you can't help but think Willis Earl Beal has made something special on Acousmatic Sorcery.
Posted by Paul POP! at 4:17 AM