Pi**ed Jeans Are No Honeys 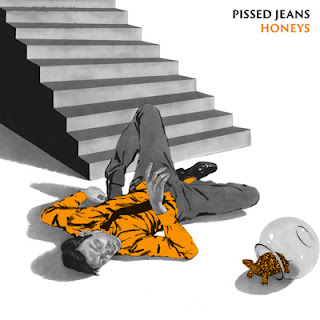 When you name your band Pissed Jeans chances are good you're not going to sing about love, fairies, summer vacations, and the joys of life. Let me tell you there's none of that goodness on their album Honeys. This group of grubby and grotty musicians throw three chords together hope they stick and just get on with it. They sound absolutely horrible, have no idea what a proper song sounds like and are so punk rock that they probably do wet themselves and probably never bathe.

Sounding like a very bad version of Danzig, Pissed Jeans grind out what little melody they can find and come up with something that sounds like a broken record stuck in a crack on the vinyl. Honeys is a mess. It's tuneless, messy, angsty and sounds like Danzig went off the rails and beat up everyone in his band and then forced them to record this record at wolf point. It's complete punk rock in the purest sense of the word because you get the sense that these guys just don't care about any of this. Honeys is there to be there...it occupies space and beats you over the head with a baseball bat if you listen too long simply because it can.

This record reminds me of why I was always glad I was a metal kid instead of a punk rock one. At least metal bands knew how to play their instruments and although much of death metal sounds like it was recorded in a cave it still offered more song structure, talent, and melody then anything punk rock ever hoped to. Pissed Jeans is annoying. Honeys is the sort of thing you'd like to swat away and get away from by any means necessary and I suspect that's just the way PJ likes it.
Posted by Paul POP! at 2:58 PM