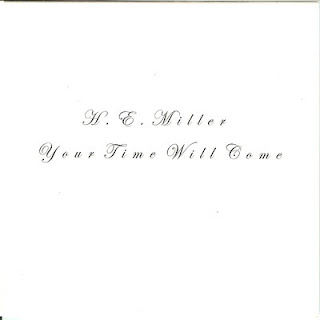 H.E. Miller is an independent artist from New York & New Jersey who has quietly recorded his Apocalyptic Dreams and now knows that Your Time Will Come with his latest album. How? Well he's recorded a ten song album of blues inflected rock and roll record that's lost in fantasy and a love of music. It's, surprisingly, not half bad stuff that remarkably at times sounds like a Bob Mould solo record and at others sounds like it should be air boating down the Bayou.

Your Time Will Come is a fun record that's got a level of energy that would put most musicians to shame. Miller loves to play guitar and you can hear that on every track here. Anyway, this is an energetic record that while obviously rooted in classic rock has it's toes dipped in indie rock, punk, and even power pop. Miller might not know that, but the comparisons to those genres and to Bob Mould are justified because not only does he sound like an amalgamation of all that at times but he has the spunk that so many of Sugar's, Husker Du's, and Mould's solo work has.

Miller is a pretty good guitar player and layers on the power chords with extreme velocity. He may not be a guitar god, but he gives it a shot. He's also a pretty darn good songwriter as well. Much of Your Time Will Come is extremely catchy and with the additional use of horns, keys, sugary sweet choruses and melodies that would make the Rolling Stones blush the record kind of makes itself easy to latch on to. Your Time Will Come may not be over complicated but it doesn't need to be; it's good stuff whose energy and style are infectious.
Posted by Paul POP! at 10:45 AM

Email ThisBlogThis!Share to TwitterShare to FacebookShare to Pinterest
Labels: he miller