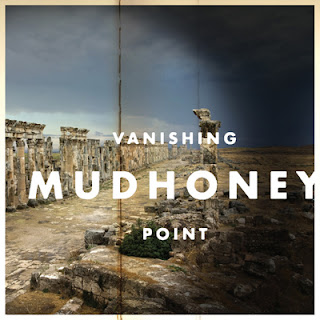 If there's one thing Sub Pop records is known for it's grunge. They practically invented the genre, they definitely curated it, and then they broke it mainstream with good ol' Nirvana. One of the lasting legacies of that whole movement were and still are Mudhoney. These guys have been cranking out the garage rock jams for well over twenty years and amazingly they're still at it. While they might be wearing flannel now to keep warm as opposed to looking cool, they still are able to write amazingly heavy, yet catchy indie rock and one listen to Vanishing Point will not only reaffirm your faith in their ability but the genre of grunge as well.

Vanishing Point is awesome stuff; it's raw, punky, thrashy, heavy and still remarkably catchy. With choppy riffs from broken guitars, screamed vocals, bashed drums, bluesy breakdowns, metal freakouts, and a lot of disheveled chaos Mudhoney beat the living heck out of their instruments here to create songs. Short, sweet and to the point Vanishing Point doesn't even remotely hint at the fact that the band has been doing this for over two decades. In fact, Mudhoney don't sound a day over five on this record. It's so pure and so good you'd swear this thing was recorded and released somewhere around 1991 when Mudhoney were at the height of their career.

These guys clearly still have the knack for indie rock and it's a joy to hear. Vanishing Point is proper grunge from a proper grunge band hell bent on proving there's no need for a post-grunge revival when the original masters are still kicking around. (How many times can I use the word grunge in one sentence?) I love this record; it's a constant reminder of why I loved Sub Pop back in my early 20's...the bands were heavy, cool, and loved metal as much as punk and smashed it altogether with reckless abandon. If the 90's are indeed back...then here, ladies and gentlemen are your elder statesmen.
Posted by Paul POP! at 12:00 AM

Email ThisBlogThis!Share to TwitterShare to FacebookShare to Pinterest
Labels: mudhoney