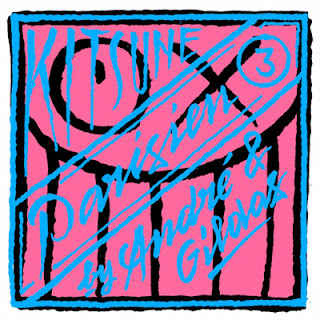 When you think of things that are consistent, one thinks of the Jaguars and their losing record, the weather in Florida and if you're a fan of electronic music Kitsune Records. This is a record label that, so far as I know, is like 98% consistently great. They just don't do bad, it doesn't exist in their vocabulary. They don't cop out and they don't waste their time on trends or scenes, they stick to what they know and they are what they are and they are great at it.

If you follow the label at all you know then that the Kitsune Maison compilations are universally accepted as a global taste maker for the dance floor. These compilations provide your feet with the tunes they will dance non-stop to until the next Maison compilation comes out. While the Maison compilations focus on Kitsune's worldwide search for cool they've only recently begun to spread their wings and look for the same thing in specific locations. From Kitsune America bringing American electro to the forefront to the Kitsune Parisien's third compilation of talent from their home base in Paris the brand is branching out in all the best ways.

It only makes sense that Kitsune release a series of compilations based on the Parisien scene. Kitsune Parisien III is a thirteen track exploration of the Paris underground via the darkened dance floors of the City of Lights. It's epic and so far removed from the dubstep and "electro-house," that's swept the planet that it's a gulp of fresh air. Say what you will, but Kitsune rarely bows to trends and this compilation is no different. This record hovers between proper electro/synthpop and house music in the fine French tradition. The result is a sensual seductive slink across the dance floor with many of the songs being instant classics. From Pyramid's, "Noise," to the sensual washes of Cinema's, "UV," the record is like a slow motion disco tuned to seduction. While the golden age of French house may be nearly a decade behind us, Kitsune Parisien III reminds us that Paris is still burning!

Perfect in just about every way, Kitsune Parisien III is no different from just about everything else Kitsune does; it's great. It's consistently cutting edge, catchy, and always ahead of the curve. It's a brilliant reminder that Paris loves to dance and that electro still has a strong pulse despite what Skrillex and nu-metal has done to dance music. So raise a glass of champers and celebrate Kitsune Parisien III ! Viva Le France!
Posted by Paul POP! at 2:46 PM