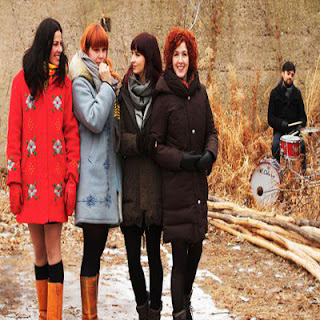 The strangely named Chic Gamine showed up on my desk with their rather cryptically titled album Closer. Now, I say cryptically because there was really no other information to go along with their record except a blurb about this band and how the French say things much better than the rest of us. That's it. What does it all mean? I have no idea, but what I do know is that Chic Gamine are a bit of a neo-soul group that utilize mutli-part harmonies, French lyrics, and a bit of a throwback sound that strangely ends up sounding modern.

Closer isn't fantastic but it's not a bad record per se. It's just a bit too modern R&B influenced for my taste and at times almost reminds me of something like a less produced version of the legendary En Vogue or TLC or something like that. While those influences are quite prevalent throughout Closer, the whole thing ends up sounding like a modern pop record with some alternative influences and even a few songs sung in French. You can see why it's not a bad record. Packed with soaring diva-like vocals, crisp beats, and some acoustic instrumentation it really sounds like something that Amy Winehouse could have produced after a bender just not quite as cool. Chic Gamine have some intriguing ideas and have come up with something completely listenable...but I didn't find it completely likable; it was just a little too middle of road for me.

If you like your modern R&B with hints of nostalgia and bits of non-standard soul music then Chic Gamine will impress you. Closer fits perfectly into the soul-revival/neo-soul category rather neatly despite being rooted in 90's R&B. They've got it all going for them in those categories, unfortunately, it all sounds a bit same-ish to me.
Posted by Paul POP! at 12:00 AM