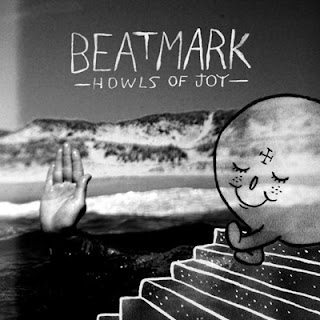 France's Beat Mark are so in love with late eighties British Pop that you'd swear that they were a long lost relative of someone from Cherry Red Records. This is a band that sounds so much like the bands that were on Postcard, Cherry Red, Fire, Creation, Sarah Records and the like that it's almost impossible to believe that they're actually from across the channel and have only been together for a few years. It's just incredible how much Howls Of Joy sounds like a relic from the c86 era..and that's a mighty high compliment.

Put it this way, if you were to look up c86 pop in the Penguin music guide next to the definition would be a picture of Howls Of Joy. Beat Mark have issued a record that jangles, fizzes, and pops with such authenticity that you'd swear it was a super project featuring members of Primal Scream, Orange Juice, The Pastels, and The Wedding Present. It's amazing, jaw dropping indie pop that's incredibly British despite being French and sounds like a fine spring day. It's effervescent stuff that's just simply overjoyed. As Cornershop's Tjinder Singh is noted as saying, "I realized that I was listening to what England had lost the ability to create anymore." It's true, this is classic British pop that's simply not made any more and it's bloody brilliant. From song titles like, the 60's influenced noisy fizz of, "Breezing," to the stompy VU like pop of, "People Of Your Kind," Howls Of Joy never looks forward but longingly looks back in all the best ways.

Howls Of Joy is essential stuff. They don't make pop like this anymore. It's joyous, clever, and energetic. In a world where the fun has been yanked out of music it's nice to know that bands like Beat Mark are still around to remind us of how great and enjoyable indie pop can be! This is the sort of record that will make shy, shuffly pop kids everywhere scream Howls Of Joy!
Posted by Paul POP! at 2:35 PM