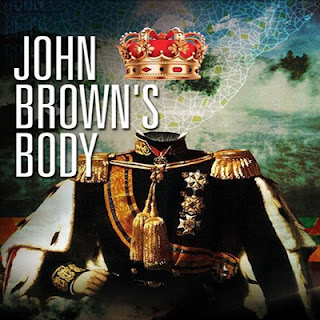 With the temperature outside being 80 degrees, I think it's fair to say that Spring (or Pre-summer) has officially sprung. That can only mean one thing...dreams of spring break and summer vacation! And what goes better with vacations, holidays, and island getaways than a slew of new tropically influenced records. It's that time of the year for music as well...the market is about to be flooded with all kinds of reggae, soca, dancehall and island jams. Well, as fate would have it two such records have just shown up on my desk...it's as if it was planned! Going by the rather unusual names of Kobo Town and John Brown's Body, neither of these band are actually from the Caribbean but both their albums sound like they were recorded there and have a very authentic feel to them.

Kobo Town's Jumble In The Jukebox comes to us from that hot bed of island getaways...Canada! Yes, Canada. Despite the mandatory rolling of the eyes and all that goes along with that, Kobo Town actually create some rather amazing calypso. Seriously. I'm talking like Harry Belafonte like calypso. The record is packed with songs that are optimistic, energetic and upbeat while maintaining a level of intelligence about them. Kobo Town is rooted in activism and politics but cover it all with sunshine and love. Jumble In The Jukebox is the melding of island influences and modern musical techniques that sound authentic despite being uniquely Canadian. If anything, Jumble In The Jukebox illustrates the influence and prevalence of island music in the world. I thoroughly enjoyed this record; it's lighthearted feel and intelligence made it an absolute joy to jump in line with.

Just down the pike from Canada in that other hot bed of reggae music, Boston, comes John Brown's Body. This Bostonian band has one of the more unusual names for a reggae group and in fact actually don't have a member named John nor do they possess his body. That being said, their album Kings And Queens is a delightfully good straight ahead reggae record. Kings And Queens is incredibly catchy and summery which if you live in Boston in March is probably a good thing. All joking aside, the musicianship is top notch and the horn section is on fire throughout this record. In fact, I'm willing to say that the horns on Kings And Queens is what makes this album worthy of repeated listening; they totally give John Brown's Body another dimension. As if to prove that point the last tune on the record, "Searchlight," is a genuine pop hit that has vacation written all over it.

So, now that you have your bags packed and your flight booked pick up these albums, slather yourself in sun tan lotion and enjoy your vacation. Be sure to send the bands photos of said vacation because after all...it's still winter up in Boston and Canada!
Posted by Paul POP! at 10:38 AM