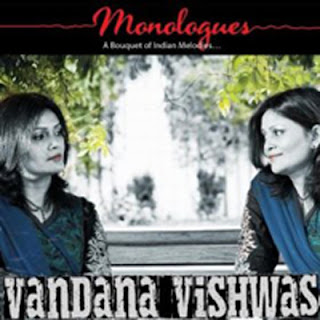 Vandana Vishwas is an Indo-Canadian artist who takes the best of traditional Indian influences and blends them with modern techniques in a gorgeous brew of sounds that are both hypnotizing and fascinating. Her album Monologues is the result of a collaboration between her and her husband and reflect the talents of both artists pretty well. It's an meditative, intimate, and beautiful record that uses instrumentation you know and instrumentation you do not to convey its free spirited yet firmly rooted songs.

Monologues is a record steeped in history and custom but unafraid to let other non-traditional sounds permeate it's songs. While sitars and tablas are pretty much the basis for most of the songs here, several songs utilize jazz-like arrangements to give the songs added depth and a modern feel. I found it fascinating and imaginative how the two different worlds mingle simultaneously and co-exist relatively well. Monologues is a record at peace and lost in ecstasy and after a couple of listens it's very easy to become lost in it's world as well. The songs on Monologues cast a spell over your ears with their subtle pace and ambiance. Vishwas' songwriting is as mesmerizing as her trembling voice and the way she's able to hold the listener in a trance is awesome.

Monologues is a great record whose strength lies in it's ability to take the ancient and modern and make them sound unique and fresh. The intertwining of the two influences give the album room to breathe and develop and allows it to be more accessible. This is a simple record that utilizes very few instruments or production techniques and Vandana Vishwas' ability to give it an authenticity and purity is refreshing.
Posted by Paul POP! at 9:51 PM