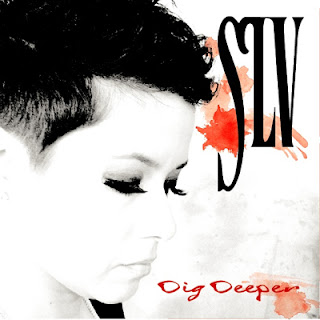 Sandra Lilia Velasquez better known as part of the critically acclaimed band Pistolera has stepped out on her own. Known as SLV for solo purposes, Sandra has just released her debut solo EP, Dig Deeper. In being true to the EP's title that's exactly what Sandra's done; she's dug deep and come up with a huge leap forward for her as an artist.

Dig Deeper is a three song record that mixes English and Spanish and rather than Latin music seems to find more in common with a worldly jazz groove. This of course could be due to the production hand of Meshell Ndegeocello, but regardless the songs are mature, jazzy and sound fresh and modern. It's a nice step forward for Sandra and it will be interesting to see how these songs and Meshell's guiding hand will influence her the other way when Pistolera resumes. Until then though, Dig Deeper and enjoy the birth of Sandra Lilia Velasquez as a burgeoning solo artist.
Posted by Paul POP! at 8:54 AM

Email ThisBlogThis!Share to TwitterShare to FacebookShare to Pinterest
Labels: SLV