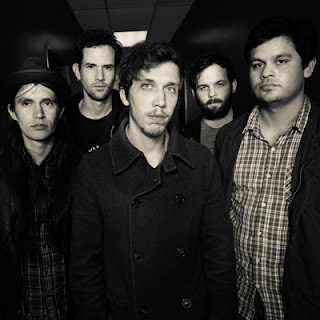 I'm not exactly sure how hills can be like elephants, but for a band name Hills Like Elephants is among the more interesting ones I've heard in a while. The name has a certain late 80's, early 90's feel to it (think Echo & The Bunnymen) and so does the band's sound. They're an interesting combination of soulful songs, falsetto vocals, and classic alternative structures. They describe themselves as Motown with drum machines and while it's hard to find that on their album Feral Flocks I can see what they're trying to get at.

Feral Flocks sounds cool; it's unusual and doesn't sound like anything else right now. It's got this kind of early U2 vibe pulsating through it and at times vocalist Sean Davenport almost channels the soul of Bono into his voice. If you throw that stuff into the musical pot next to this ethereal indie dance thing they try to create you might understand where Hills Like Elephants are coming from. It's hard to describe and, honestly, Feral Flocks isn't the easiest record to get into. While it's hooks are fairly obvious and well structured I suspect most people would have issues with Davenport's vocals. They're just so, err, out there and un-indie rock that it's probably off-putting to your average hipster. Given time, however, Davenport's croon wins you over. You kind of have to think of Hills Like Elephants as an American blue-eyed soul group that's lost in their Style Council record collection; once you let that settle in Feral Flocks becomes rather enjoyable.

There aren't a lot of bands like Hills Like Elephants in the States. Their ability to take late 80's British pop mix it with an overabundance of soulful singing and get tolerable results. But much like Weller did with the Style Council, they manage to make it work. Spending time with Feral Flocks is essential; the more you spend with it the more you'll find yourself liking it and the more it grows on you. Hills Like Elephants clearly know how to write a good song, it's just getting used to their approach that takes some time.
Posted by Paul POP! at 8:00 AM