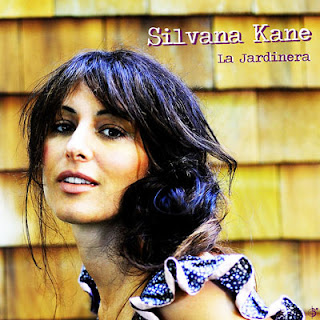 Silvana Kane is probably best known as the vocalist of global pop band Pacifika. Born in Peru but Canadian by residence, and traveled by nature Kane has been back and forth between the two continents most of her life. Travels which have undoubtedly influenced her emotionally, culturally, and musically; throw in other South American influences from Brazil, Argentina, and Chile and you have one well seasoned and informed musician. Her solo album La Jardinera is a reflection of that and it's something to behold.

Far more intimate and quiet than anything by Pacifika, La Jardinera is a fragile and delicate recording that's a reflection of Kane's musical prowess. Much of La Jardinera is reflective and solemn while being completely inspirational. Sure it's just Kane with minimal musical arrangements but the songs manage to be incredibly touching on some emotional scale. Her voice is awesome and at times feels as if she's whispering into your ear. It's a very pretty record that hints at her musical heroes, thoughts, emotions, and values.

La Jardinera is an interesting recording because of just how transcontinental it is. I challenge you to find one person you know that's as well traveled as Silvana Kane is. Having been up and down the planet and picking up all this stuff along the way has aided her ability to craft her songs and those of others into something that touches your soul. Her songs and the covers she's chosen are genuine and contemplative and listening to them in Spanish only makes them feel more worldly. It's impressive stuff no matter how quiet it is.
Posted by Paul POP! at 2:28 PM