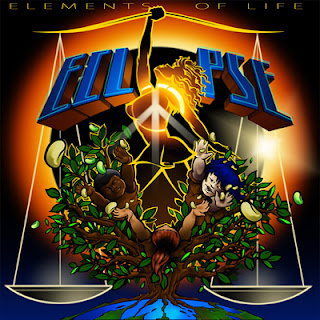 When one thinks of Louie Vega one cannot but help to think of house music and Masters At Work. This legendary producer practically created, defined and popularized house music throughout much of the 80's and 90's. Now Little Louie has come up with another idea that goes by the name of Elements of Life. This live orchestrated group creates a energetic fusion of global sounds that's as diverse as Vega's hometown of New York City.

Elements of Life's new album Eclipse took four and a half years to create and features elements and sounds of Afrobeat, jazz, Latin, R&B, Gospel, and of course house. The record also blends the occasional spoken word passage into the mix creating a completely fascinating vibe that hovers between coffee house cool and a jumpin' jazz club. Eclipse is an awesome record of diversity, brilliant arrangements and features a band that can play the heck out of anything put in front of it. With members coming from all over and allowing their influences and ideas to flourish within the Elements of Life, Louie Vega and his band have created a vibrant exciting group that is filled with so much creativity and vivacity it's stunning.

With soulful, intelligent lyrics and enthusiastic musicians Eclipse is full of musical surprises and never ceases to entertain. This is the sound of the world and it's themes of inspiration and hope are universal and far reaching. Little Louie Vega may be a legend on the dance floor but he's clearly making another name for himself with Elements of Life and Eclipse is proof of that. In fact, this is the sound of a true Master At Work.
Posted by Paul POP! at 12:00 AM