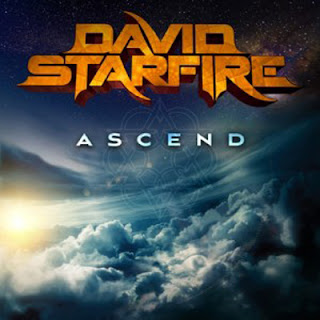 David Starfire's Ascend is a wolf in a sheep's clothing. Disguised as a world music record with references to Bhangra and reggae Ascend buries what this record is all about deep within it. The first four songs of this album seem to hint at a Bhangra chill out record with global grooves permeating throughout the songs. It's all very chilled coolness and then it happens...

The bottom drops out. Somewhere around the fourth song Ascend turns into this face melting dubstep record. It leaves the chilled out vibes of the first three songs in the dust and turns into this brutal beatastic excursion into the darker recesses of electronica. It's almost as if David Starfire simply tuned on a switch and boom went the dynamite. It's a pretty drastic shift in dynamics that would probably scare the bejesus out of anyone who thought this was an Indian influenced chill out record. That being said Ascend is pretty awesome. I love both aspects of this effort...the global chill and the brutal bass. It's a slap across the face when it happens but it hurts so good and sounds ridiculously powerful.

Starfire clearly is comfortable in any situation and this record proves it. His ability to layer hip hop, dubstep, electro, Bhangra and even reggae all with in a song is impressive. He can rip your head clean off with a brutal bassline but still make the song catchy enough to linger within your skull for days. "House of Bhangra," and "Knight Riddum," are perfect examples of this as the tunes are absolutely blinding and still capable of dance floor destruction.

Ascend is an impressive, cleverly disguised record that lulls you into a false sense of chilled security before it pulls the rug out from under you. While I'm not normally a huge fan of dubstep, I thoroughly enjoyed David Starfires globally influenced grooves. This is one dubstep record worthy of your attention even if you hate the genre.
Posted by Paul POP! at 8:00 AM