Ballake Sissoko Is At Peace 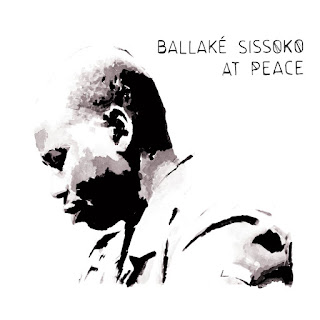 Sometimes a record can almost serve as therapy. The soothing sounds creaking out of vinyl can tame the beast that's lurking within in. It acts as a de-stressing agent that calms your nerves and allows you to get on with the day. That being said, Ballake' Sissoko's album At Peace is exactly what the doctor prescribed on this Monday morning.

At Peace is truth in advertising as it's Malian based music is absolutely gorgeous, light on the ears and almost ethereal in it's sounds. With traditional instrumentation (Kora & Belafon), strings, and guitars Sissoko and his band create this world where everything is calm and at rest. It's quite a world away from what's actually going on in Mali at the moment but as I mentioned it's the sort of record that helps you get on with it and the sort of thing that points you in the direction of carrying on regardless of how grim things might be. At Peace is filled with optimism, beauty and tradition and it's minimal sounds are simply mesmerizing. This is music for soothing, for relaxation, for letting your mind wander endlessly and it works.

You may think you know African music but you don't. At Peace proved that I didn't. While hinging on almost being a new age kind of record Sissoko uses enough traditional instrumentation and native influence to make it officially a world music record. Regardless of where it comes from or what instruments are used At Peace is a stunning record that's beguiling and an absolute joy to listen to. This will be on repeat most Mondays from now on...I need it's soothing power.
Posted by Paul POP! at 2:40 PM