Ceremony Head To The Zoo 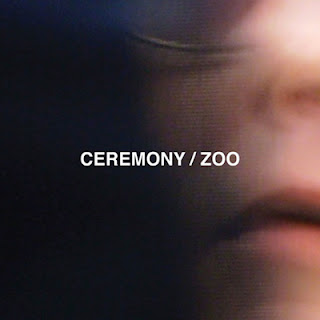 Ok, I have to admit this was not the Ceremony I was expecting. With a name like that I was thinking Ceremony would be some sort of synth pop band based loosely on New Order. I mean Ceremony is a record by New Order so I guess that was an easy leap for me to make. Whoops, I messed up. What Ceremony are, is nothing like New Order. Oh no, Ceremony are a loud and brash rock and roll band with elements of Epitaph-ish punk rock running through every song.

Thrashy, raw, sloppy, and all over the place at the same time Ceremony's album Zoo sounds like being chased in one by a series of lions, tigers, and crazed llamas. Zoo is noisy three chorded stuff that sounds like it has been ripped from the strings of their guitars against its will. This is a grip it and rip it kind of record where no expense was spared because it sounds as if there was no expense. It's uncontrollable stuff that runs wild across twelve songs and starts all kinds of trouble along the way.

With an under produced DIY sound and enough three chord punk rock to last a life time Ceremony blast through Zoo as if they were kicking a series of doors down; one right after another. Zoo is slightly controlled chaos that only slows down for breathers and to assess the damage. This is garage punk the way it was meant to be played; loud, fast, and hard. Zoo isn't the most revolutionary record in the world and it's unlikely to establish a New Order but it is likely to kick your skull in.
Posted by Paul POP! at 9:27 PM

Email ThisBlogThis!Share to TwitterShare to FacebookShare to Pinterest
Labels: ceremony