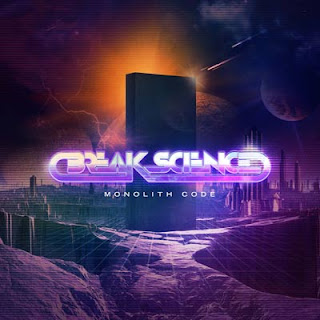 I'm not the biggest fan of Dubstep. To me, it's dance music for people who can't handle more than 100 beats per minute. It's slow, grinding, noisy and pretty much tuneless. It's the exact opposite of proper house music, it's not as good as drum and bass, it's about as sexy as plywood and it's seemingly the only UK dance music export America has figured out.

While Skrillex is the unfortunate face of the genre over here there are other artists around the world who aren't like the Nickelback of dance music and actually are attempting to do something different within the genre. Amongst those artists is Brooklyn's Break Science. The duo brings more than just stretched out bass waves and slow beats to create their own brand of brutal dance floor numbers. Break Science's EP Monolith Code is a six track swath of electronic destruction that mixes dubstep, abstract hip hop, drum n' bass, and even a sprinkle or two of house. It's a dark, shadowy big beat kind of record whose basslines wobble, whose beats bash, and whose hooks are murderous.

Monolith Code is absolutely gargantuan in size...its songs are sprawling, mysterious and surprisingly good. If more dubstep was like this I think I could actually appreciate the genre. For two kids from Brooklyn they've got a sound that could easily shake the planet and perhaps rip it out of orbit. They are awesome at what they do and they're open minded enough to realize that you can go outside of the lines and still make quality tunes. They've done that six times over on Monolith Code and proved that theirs is one code worth cracking.
Posted by Paul POP! at 8:31 PM