Those Lavender Whales Throw The Tomahawk Of Praise 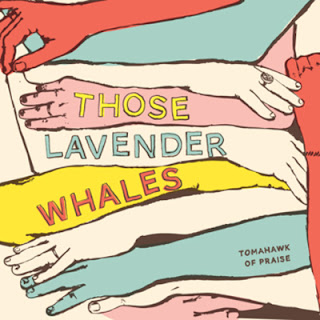 Those Lavender Whales are a group of South Caroline-ans who create music for lazy rivers, sunshiny days, spring mornings, and long walks. Their album Tomahawk of Praise is a indie pop gem that takes rustic influences and cheers them up a bit. It's a shy and relatively fragile record that sounds as if it were so delicately assembled and so bashfully played that it's as if Those Lavender Whales were hiding when they recorded it.

All that being said, Tomahawk of Praise, is quite worthy of praise. It's a fantastic record of jangly indie pop that utilizes banjos, pianos, and boy/girl harmonies so well that it's guaranteed to put a smile on your face. It may be shy and fragile, but the record is ridiculously upbeat and adorable. This is such a huggable record that the arms on the record cover could probably reach out and give you one...and if they can't they should. If ever a record was twee and cute this would be it. The innocence, the apprehension, and timidity that permeate every song make Tomahawk of Praise incredibly likeable. This is a humble little record wants to be your friend and Those Lavender Whales really want to share it's whimsy with you.

Tomahawk of Praise is a great record. Those Lavender Whales have created a syrupy sweet record that's so sugary and so good that you'll find yourself wanting it near at all times. This is the kind of record that could put a smile on even the most bitter of individuals. Happy, modest, rustic, quirky, jangly, and most importantly, fun there's really nothing bad you can say about Tomahawk of Praise. It's fragility and constant upbeat nature makes it worthy of heaping praise up on it and it's fantastic and catchy songs make it worthy of many, many listens.
Posted by Paul POP! at 10:57 AM

Email ThisBlogThis!Share to TwitterShare to FacebookShare to Pinterest
Labels: those lavender whales