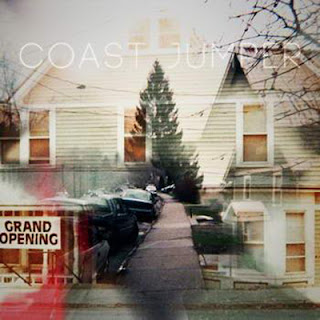 The name Coast Jumper has all sorts of suicidal connotations attached to it. It sounds like a grim name if you ask me, but the weird thing about that is that it's about the darkest thing about the band. Combining ethereal guitar work, distortion, and a sense of being off center, Coast Jumper create a strange sort of worldy indie surf rock vibe. It essentially sounds like the sun rising over the California coastline and then crashing into the sea. Their album Grand Opening is a study in quiet loud fluctuations, lush harmonics vs wrangled guitars, and strange songs that are wispy and noisy.

Grand Opening is an intriguing listen because of Coast Jumper's strange band dynamics. This is a band who for the most part sound as if they're asleep and only occasionally wake up in a startled fit of guitar pyrotechnics and noise. It's all good though because whether loud or muted the songs here are hazy and gauzy delights. This is a Sunday morning set to music with a dose of panic thrown in to make it all a bit exciting. Guitars seemingly wind their way through songs, vocals sigh their way through and drums seem brushed and barely played. It's only when the band goes into a fit that things get rambunctious and chaotic; at that point it's like a sheet of distortion falling on top of you.

Coast Jumper is a nice album of contrasting sounds and styles battling for control. Ethereal or distorted, quiet vs. loud, peace vs. chaos it's an endless struggle on Grand Opening as both seem to come to a draw. For the most part Grand Opening is a pretty good record of jumpy, strange, whacked out indie rock that may or may not be suffering from continual nightmares. If you like a jumble sale of a record then Coast Jumper have created the ideal recording with Grand Opening; it's a roller coaster ride of loud and soft gone off the deep end.
Posted by Paul POP! at 10:46 AM