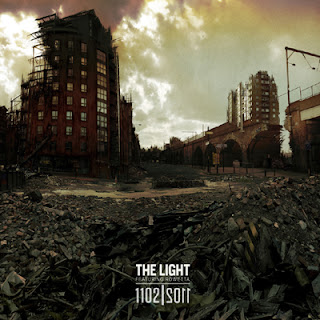 Unless you live under a rock you should know who Peter Hook is. His legendary bass lines and playing style are known the world over as some of the most influential in modern pop music. Hookie has been a busy guy the last couple of years with various projects, tours and the like and his latest project is a team up with Happy Monday's back up vocalist Rowetta. Known as The Light he and Rowetta have taken a few classic Joy Division anthems and even completed an unfinished work for their EP 1102/2011.

While the original versions of each of the three complete Joy Division songs could never be beat, Rowetta's vocals give each of the covers a sense of drama and near operatic presence that the originals didn't have. I prefer to think of them as completely different interpretations of the songs rather than a tribute. While musically they sound similar, Rowetta's vocals really make them completely different and take them in a far darker and moodier direction, if that's even possible. Her soaring vocals cast a shadow over the songs which allow them to be grimmer than the originals.

Perhaps the biggest draw of this EP though is the unearthed and unreleased track, "Pictures In My Mind." Essentially a spiky, jumpy post punk tune Peter Hook finished the tune off by thrashing it out a bit, making it a bit rambunctious and less atmospheric than other Joy Division songs. Whether or not it could have ever been an A-side to a single is up for debate as it even appears as track two here. It is a good song though and like the punky energy that's been brought to it. Hookie has done a good job of flushing it all out and the vocalist who sings the tune so successfully taps into his inner Ian it had me wondering whether or not the vocals were actually pre-recorded.

If you're a Madchester fan, a Joy Division fan, or a Monday's fan you'll find 1102/2011 a worthy investment. Featuring a communal vibe and new material what Joy Division fan wouldn't want this? Here's hoping that if The Light continues maybe they'll develop some new material not tied to either band...lord knows they've got the talent to pull it off.
Posted by Paul POP! at 11:13 AM