Nova Social Apologizes For Any Inconvenience 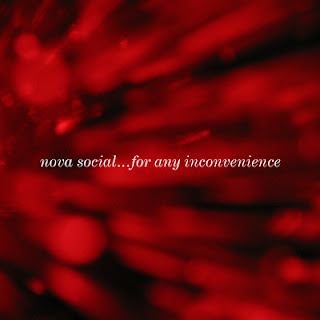 Nova Social has apparently been a major influence on New York City's underground pop scene for the best part of a decade. Having already recorded two albums it's truly amazing that they're still underground and more importantly I'm wondering why the heck I've not heard of them until now. Their third album For Any Inconvenience should finally see them rise above ground and show the world what they've (and apparently me) been missing...delectably danceable synth pop.

For Any Inconvenience is a polished, tight, well focused record that sounds like Depeche Mode, The Pet Shop Boys, and Hot Chip in a post electro party of epic proportions. This is an incredibly infectious record and its hooks are so far from subtle they might as well be giant clubs that bash you over the head. This is an awesome album that's got its tongue firmly in cheek and its feet firmly planted on the dance floor. In touch with it's inner goth as much as it's inner scenester the album crosses genre's easily and mixes dark flourishes with light touches as if by second nature. It's an album of contrasts and colors, humor and seriousness and I think that's why I like it so much.

For Any Inconvenience is a high gloss well produced production that’s going to be hard to keep a secret or be kept underground. This is high-art that's glossy, shiny, and so good that it can't be held back any longer. This is the album that sees these New Yorkers break out. Nova Social are awesome masters of post synth pop and their lush songs, witty lyrics, and seductive beats will keep your ears ringing and your feet shuffling. For Any Inconvenience isn't any inconvenience at all but a sheer joy to listen to.
Posted by Paul POP! at 9:13 PM