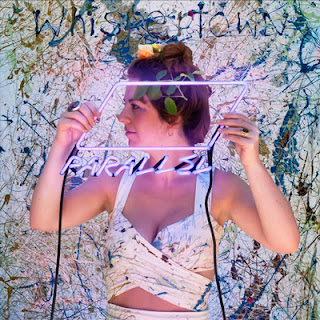 Originally known as Whispertown 2000, Whispertown has not only changed it's name but changed it's leaning's as well. As the saying goes out with old and in with the new, and gone is Whispertown2000's folk pop sound only to be replaced by Whispertown's turn toward bed-sit lo-fitronica. Their new record Parallel is a fun spunky record that takes the best bits of Whispertown2000 and modernizes it through the use of electronics.

Parallel at times sounds like a series of Feist recordings that never made it on The Reminder. It's all very shy, shuffly, kind of folky, kind of dancey, ridiculously catchy and the kind of pop record that's guaranteed to uplift the lowest of the low. Vocalist and head Whisperer Morgan Nagler has an absolutely adorable voice that's so easy on the ears and so easy to fall for you can't help but just sit and listen to her breathe out the words to her songs. She's got the quintessential indie pop drawl, if you will, and she leads Whispertown on this heartfelt journey across Parallel.

While I much prefer Whispertown's more upbeat and/or electronic direction, I appreciate the fragile delicate moments that dot Parallel as well. Morgan's voice holds it all together and keeps Whispertown consistently charming. Parallel is an impressive indie pop record that has a big heart and big songs and that's nothing to whisper about.
Posted by Paul POP! at 11:36 AM

Email ThisBlogThis!Share to TwitterShare to FacebookShare to Pinterest
Labels: whispertown