The Irrelevant Future Of Estrogen Highs 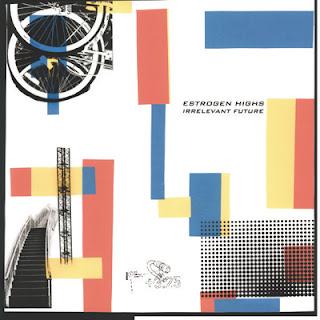 The Estrogen Highs are not a group of girls who get per-menstrual with their guitars,oh no, this is actually a bunch of guys who aren't even on HRT but somehow have come up with a most feminine name. The band, in all seriousness, is a garage punk outfit who detune their guitars, amp up their riffs, and throw out songs like yesterday's trash. Their album Irrelevant Future is a raw, under produced stumble through a three chord neighborhood where technicality is replaced by never ending energy.

They may not be jazz musicians or even know who Miles Davis is, but Estrogen Highs have a level of rambunctiousness and honesty that powers them through any musical difficulties they might have. They've got the three chord thing down pat and they beat the heck out of every three chords they play with the result being a twisted heap of punk rock that's spiky, catchy, and a bit sentimental. Irrelevant Future might seem to have a depressing overtone to it, but the music keeps things upbeat, speedy, and a lot of fun. This is raw rock and roll unleashed on the world and let alone to run rampant.

Irrelevant Future is an enjoyable listen of sloppy, spazzy, jangly, aggressive pop music that sounds as if it were recorded in a living room with a Tascam four track. It's great stuff whose purity and honesty is a refreshing change of pace. There's no posturing, no hipster preening; it's just pure energetic rock and roll and it might just kill you. Estrogen Highs might have a confusing name but they write easy to figure out stuff and it's done so well that it's impossible not to like. They may think they have an Irrelevant Future but the actuality of it all is that their future is looking pretty bright.
Posted by Paul POP! at 10:52 AM