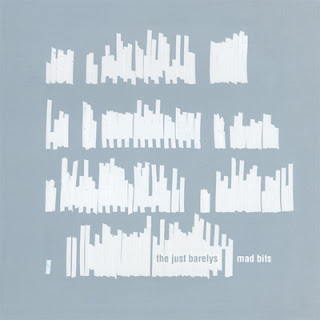 The Just Barelys are a Canadian outfit who consist of just two members; Stephen Kelly & Eleanor King. This dynamic duo write jumpy indie pop that brings to mind memories of classic Teen Beat records from the mid to late 90's. Focused on charming boy / girl harmonies, jangly and jumpy guitars, and danceable beats the band have tapped into their inner jangle pop gods and created one heck of a record with Mad Bits.

Far from mad but close to being perfect Mad Bits is a fizzy pop treat that's kind of like Mates of State if Kory played guitar in stead of keyboards. The record is all sunshine and happiness despite their slanted lyrics and it's about as catchy as SARS. The Just Barelys are an awesome band and their effervescence is so contagious that if you're not grinning from ear to ear by the end of the record you should probably go see a doctor. With just two members and just two instruments the fact that they are able to pull this off and do it so well is a tribute to their heart and their ability.

Constantly upbeat, consistently catchy, ridiculously jangly and about as light as air Mad Bits is indie pop brilliance put on repeat. The Just Barelys are far from barely being good, in fact I think it's easy to say that Stephen and Eleanor are just about as good as you can get. Simple, to the point, fun, and just quirky enough to seem odd The Just Barely's are a duo worthy of praise. Mad Bits is a smile the size of Texas, it's a jolly romp through a field of classic indie pop sounds and quite honestly one of my favorite records this year.
Posted by Paul POP! at 10:33 AM