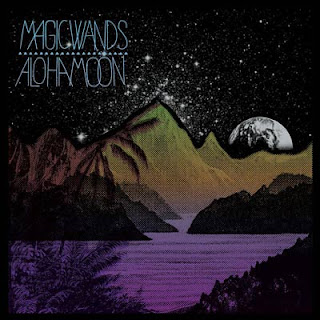 Magic Wands are a tag team known as Chris and Dexy Valentine who together creates sensual downtempo beat driven dream pop. Since their initial release Magic, Love & Dreams the band have slowly built up their live reputation and their songwriting prowess and are now poised to take over the world of downtempo. Their new album Aloha Moon is a lush, gorgeous affair that harks back to early Goldfrapp and UK trip hoppers Mono.

Self-dubbed as lovewave, Magic Wands cast a spell over the listener with layered synths, sinfully seductive vocals, and songs that are incredibly catchy. The ten songs here all tug at your ear drums with deep hooks and deep grooves. Aloha Moon is as chilled as it is good and as close to being a combo of trip hop and chill out without it actually being chill out or trip hop. It's just beautiful stuff that's sung with such beguiling presence that it's hypnotizing. Aloha Moon, as a result, is just about perfect in every way.

This is a magnetic and engaging album that charms all who take the time to listen to it. Magic Wands slow motion disco and tripped out chill wave is absolutely stunning and Aloha Moon succeeds as a result. Albums like this are rare nowadays; excellent the whole way through and ridiculously consistent. Call it lovewave, call it chill wave, call it downtempo call it whatever you want just call it good.

The album is due for release on April 24th.  You more than likely can pre-order it from Amazon now.  Do it.
Posted by Paul POP! at 8:17 PM