Mono's Hymn to the Immortal Wind 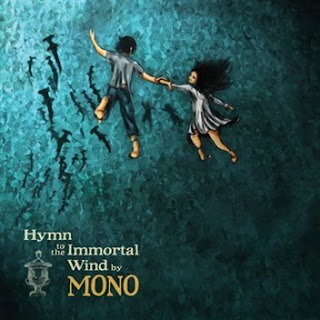 Mono by definition means, designating sound transmission or recording or reproduction over a single channel, something the Japanese noiseniks who go by the same name know nothing about. For Mono the band is about as close to being mono the sound as the sun is close to the earth. This group of post rockers makes music not of this earth in stereo that the human brain may or may not have trouble comprehending because of the sheer magnitude of their recordings and the complexity that goes along with them.

In celebration of the bands on going quest to make absolutely massive soundscapes and their tenth anniversary, the band Mono have chosen to release thier first album in three years. Entitled, Hymn to the Immortal Wind you immediately get a sense of the size and scope of this recording and then upon listening to it, it becomes apparent that this is a band who creates classical music without classical instrumentation. While the songs themselves are not divided into movements they are at times very reminiscent of traditional classical works that work in that framework.

While Hymn to the Immortal Wind is absolutely massive and more complex than trying to figure out Earth's gravitational constant in a black hole, the album is also incredibly beautiful. As the title suggests, each of the songs here are delicate as much as they are intricate and sound as if the wind may very well carry them away before we finish listening to them. They are fragile works to be treasured while being enjoyed and Mono does an amazing job at creating stunningly angelic atomospheres that envelope the listener in a blissed out experience straight from heaven.

Using guitars, drums and effects pedals...lots of effects pedals, Mono create swirling sheets of noise that are warped and manipulated into the freeform and expansive songs that make up Hymn to the Immortal Wind. It's as if My Bloody Valentine became mute and just created endless shoegazing missives from the great beyond. Hymn to the Immortal Wind is truly beautiful stuff and as the guitar noise cascades into something approaching music you can't help but sit in awe of how amazing Mono really are and how the create such massive sounds with just four people.

Hymn to the Immortal Wind is unearthly and unbelievable to say the least. It's cinematic textures, classical structures and spacial atomospherics help create the world in which Mono live in. It's a wonderful world of noise, manipulated and processed into something much more than just notes arranged into music for your ears; it's a world in which we're invited into and may have difficulty in leaving when the album comes to a close.
Posted by Paul POP! at 1:48 PM