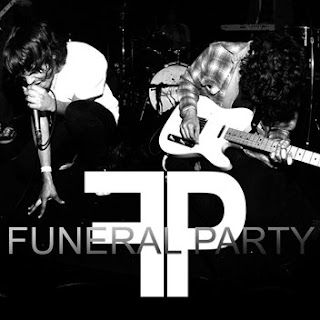 Funeral Party's three song Bootleg EP is a blast of post punk disco funk that will most assuredly light dance floors on fire where ever it is played. Sounding something like an Americanized Bloc Party meets old Moving Units and a vocalist who has strep throat, the Bootleg EP is a speedy, jaunty little record that is by far too short.

The three songs here, "Car Wars," "NYC Moves To The Sound of LA," and "Chalice," are raw, rough, and hardly produced just like the best post punk records of the 80's. Bootleg is an aggressive record that announces its presence, busts down the doors, takes over the DJ booth, plays what it wants to hear and doesn't really care what you think. In other words it's deadly and dangerous stuff just like rock and roll should be.

The Bootleg EP is a brilliant taster that only starts to hint at how brilliant this band is at creating dance floor bombs that rock as much as they roll. Highly recommended.
Posted by Paul POP! at 8:14 PM