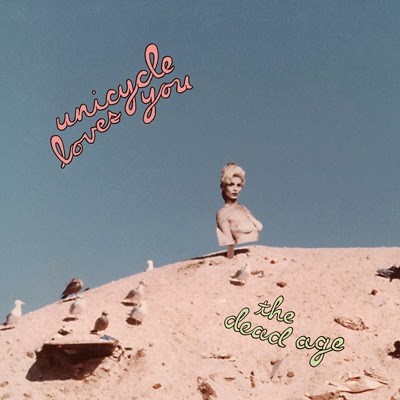 Unicycle Loves You have trolled through pop music history over the course of three albums in search of inspiration and great songs. Thus far they've covered everything from jangly pop, post-new wave, and garage rock. But as is their MO, they're always on the hunt for something new. On their fourth album, The Dead Age, they've left the garage and have headed toward the sturm and drang of noise pop with reckless abandon.

The Dead Age is a slice out of the Sonic Youth book of how to lose your hearing in twelve easy steps. Sounding like a more melodic and less pretentious take on Daydream Nation, ULY cranks up the amps, processes the heck out of everything and comes up with an album that's melodically brilliant and noisily ear numbing. Sheets of guitar noise reverberate off of each other creating a wall of distortion and chaos that's only held together by the rather distantly recorded melodies of Jim Carroll. This is unrefined, raw, and pure pop music stripped down and laid bare. The Dead Age is the sound of a band purposely dismantling itself and then duct taping it all back together rather shoddily. That might sound like a bad idea, but ULY are a strong enough band to pull it off and make it sound good. The Dead Age is a rather enjoyable romp through a minefield of guitars exploding, wrangling and shredding themselves.

To say ULY have been around the block a few times would be an understatement; four albums and four approaches is pretty impressive. If there's a sound that tickles their fancy, they're all over it and their latest excursion into their never ending search for The Tune is migraine inducing fun. I'm left wondering what's next for these guys? Dubstep? Symphonic arrangements? I have no idea, but I can't wait.
Posted by Paul POP! at 7:27 PM

Email ThisBlogThis!Share to TwitterShare to FacebookShare to Pinterest
Labels: unicycle loves you