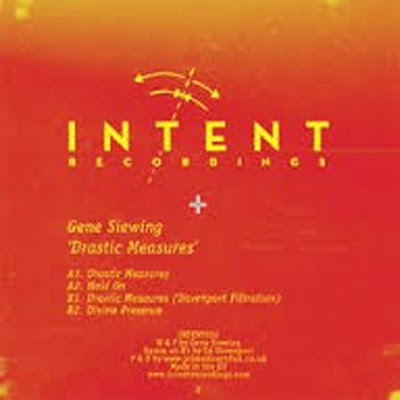 St. Louis DJ Gene Siewing has apparently sailed the Mississippi all the way out to the Atlantic and ridden the Gulf Stream to Germany. Now making waves in Berlin this DJ turned producer has just released his second single on his new imprint Intent Recordings. The single, Drastic Measures, is a sweet slice of sexy deep house goodness that pulsates with sensuality and chilled vibes. Each of the four tracks here, "Drastic Measures," "Hold On," "Divine Presence," and the Davenport Filtration mix of the title track are all total floor fillers that takes the late 90's house phenomenon and brings it into the 21st century.

Complete with odd vocal samples, huge hooks, chilled vibes and a tempo that's somewhere around perfect the tunes on Drastic Measures wash over you in a groove laden shower of sensuality. Tech house flourishes and atmospheric grooves are evident throughout but the overwhelming feel of this record is deep going deeper. It's fantastic stuff that harks back to an age when house truly was a feeling that was hard to shake (something EDM lost in the aggression). Drastic Measures is essential stuff.
Posted by Paul POP! at 7:34 PM