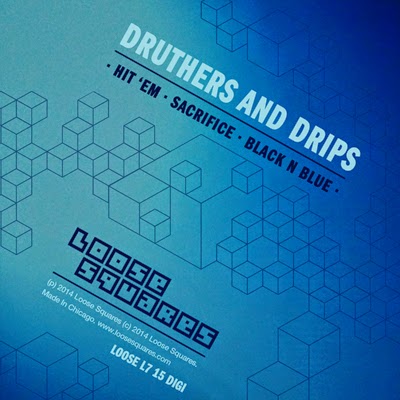 Druthers & Drips latest single is an interesting little electronic battle weapon. If you've ever wondered what hip hop or an amen break would sound like if it got lost in a chill wave Hit Em aims to answer that question. This slow moving, churning, bass intensive single seems to be like something out of a 1980's Miami Basswaves tape. In fact, it's so Miami sounding that you can hear traffic on Brickell Ave.cruising past in your Celica GT if you listen closely.

Featuring loads of 80's-like rap production sounds and techniques, the thing sounds like 2 Live Crew moved on to dance music and left being as nasty as they want to be to Poison Clan. The single is so rooted in hip hop and early drum and bass production that it seemingly includes built in trunk rattle. Things thump, rattle, and roll all the while found samples like samurai clangs, chanting, and vocal snippets whizz by with repeated regularity. While I'm not too sure of the dance floor action this single will inspire, I'm pretty sure that it will blow the doors and 12" woofers off of your 1985 Mustang 5.0 cruising down Ocean Drive on Friday night.
Posted by Paul POP! at 9:24 PM

Email ThisBlogThis!Share to TwitterShare to FacebookShare to Pinterest
Labels: druthers and drips