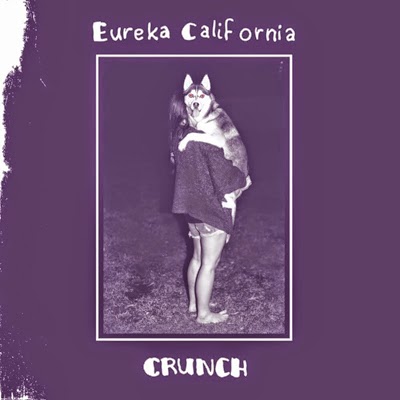 Sometimes being obnoxious can work to your advantage. It certainly does for Eureka California who's album Crunch is an energetic explosion of spazztic indie rock riffage and their second album in less than two years. Seemingly unable to stop making music, Eureka California can't slow down and that inability to control themselves is reflected within the sounds of Crunch. Sounding like a long lost artifact unearthed from 1994, this record is loud, raw, unrefined and about as sloppy as the best Pavement record.

Crunch is a hyper, jumpy, caffeine fueled journey through eleven songs in twenty five minutes. It's such a fantastic mess that the whole thing sounds like it was pieced together with chewing gum and duct tape and recorded on a broken boom box found their parents garage. It's exuberant and simple and almost impossible not to love. Guitars jangle, wrangle, distort and sound like they're tearing themselves apart while drums bash and bang and the vocals strain, scream, and snap vocal chords. Crunch is one giant wall of indie rock noise that should really suck but miraculously doesn't. It's proper indie rawk and it's relentless in the pursuit of the two minute noisy pop song.

Crunch on paper isn't much to write home about, it's an uncomplicated, noisy and brash mess. But listening to the thing makes it all worthwhile. This is what indie rock is supposed to be like; it's honest, raw, and pure and contains zero percent posturing. As their bio notes Eureka California are often torn between rocking out and giving up. How can you not love that? That's the kind of rock and roll I want to listen to...bands with a suicidal lust to just kick butt and rock out or chuck in the towel and go home.
Posted by Paul POP! at 8:35 PM