Shade Themes from Kairos Is Something To Get Lost In 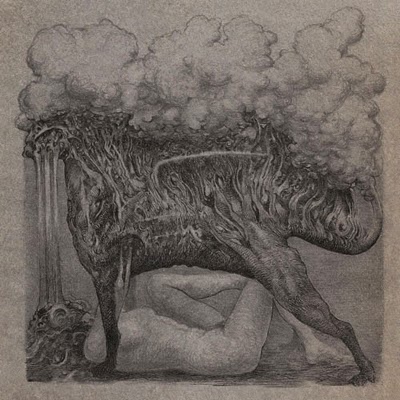 Shade Themes from Kairos is a continuation of a soundtrack project created by Belgian filmaker Alexis Destoop and musicians Oren Ambarchi, Randall Dunn and Stephen O'malley . The album, strangely enough, plays out like a soundtrack and is a textural, expansive journey into the imaginations of it's creators. Mostly ambient with broad strokes of guitar trickery, atmospheric rhythms and strange found sounds the record is as fascinating as it is creepy.

Shade Themes from Kairos is epic in scope and seemingly rolls on for days with all sorts of atmospheric sounds co-mingling to create this abstract and weird soundworld where Ambarchi, O'malley and Dunn reside. The record is a twisted peek into their musical psyche's and how moving images and ideas from a movie environment can steer their musical creativity in several directions at once. Minimal at it's most expansive and barely there at others, the record plays out in a wondrous yet disturbing way that could possibly drone on for an eternity. With organic sounds colliding with synthetic ones and ambiance washing over it all in cascading waves of hypnotizing rhythms the record is a fine example of modern minimalistic composition.

Strange, coarse and a work of ambient brilliance, Shade Themes from Kairos is the kind of record that you play in a dark room and hope that the supernatural doesn't get involved. It's a beautiful work of never ending soundscapes and musical modernism. The feel good hit of the year it is not, but Ambarchi, O'malley and Dunn have created a intriguing listen worth getting lost in.
Posted by Paul POP! at 8:46 PM