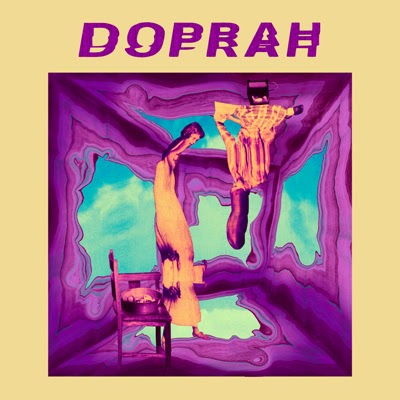 Oprah's empire is vast; from television to books to magazines her depth of power is nearly limitless...but music? Oh, wait, this isn't Oprah it's Doprah? Ok, Doprah apparently are a dynamic duo as far away from Oprah's grip as humanly possible; Christchurch, New Zealand. Having released numerous singles in the land of Mordor the band have had number one hits and even opened for Lorde, but have never had anything available Stateside. That's all changed with their five song self-titled EP.

Doprah (not Oprah) is a lush and subdued take on the whole chilled out/chillwave thing mixed with equal parts of Bjorkian quirkiness and Target-like pop hooks. With synthesized atmospheres and washes, ghostlike vocals, and a clever pop sensibility Doprah is quite the mesmerizing little record. Vocalist Indira Force coos her way through each of the songs here and her voice is so hypnotic that your eyes are likely to get all googly as she seduces your ears. Even when the band intentionally uses auto-tune to chop her voice up it still sounds good. Steven Marr, the other half of the duo, wisely produces this ambrosial soundworld by enveloping Force's voice with aural beauty and luxurious textures. The whole thing has a sheen and style to it that's simply riveting and while it might be cliche for something to be chillwave in this day and age, Doprah aren't and they manipulate it with a level of precision that makes it a genre all their own. Doprah might never be as popular as Oprah but they are ridiculously good and worthy of your time even if they don't have their talk show.
Posted by Paul POP! at 9:12 PM

Email ThisBlogThis!Share to TwitterShare to FacebookShare to Pinterest
Labels: doprah