Toy Soldiers May Be Boys 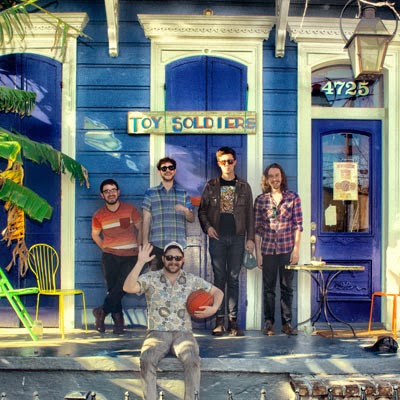 Toy Soldiers are an unassuming bunch, and judging by the cover of their album The Maybe Boys you'd never know what was going on in the inside. The Maybe Boys looks like it walked straight out Margaritaville and is ready for a little pick up basketball game. Complete with banana palms, guys in shorts, and the aforementioned basketball this doesn't even look like a record cover! But as the saying goes, you can't judge an album by it's vacation photo-like cover. What Toy Soldiers hide underneath this weekend trip picture is an album of swampy boogietastic blues and Delta influenced rock and roll that rocks incessantly up and down the Mississippi River.

Rooted in the blues this is the sort of thing you'd expect to hear all along Old Man River. It's truly amazing that these five unassuming guys are able to so easily create authentically awesome music. Put it this way, they don't even look old enough to find New Orleans on a map much less play music straight from Bourbon Street. These kids are impressive and the tunes they write feature everything from piano to accordion and harmonica to just about everything in between. The Maybe Boys as a result has this deep home, born on the bayou feel that's as tasty as a big bowl of Jambalaya! If you could imagine the Strokes in a bar fight with the Black Crowes on a paddle wheel boat lost in a swamp you have exactly where Toy Soldiers are making this brew of brilliance.

The Maybe Boys is a blues record for people who don't even know what blues records are about. Toy Soldiers rock, roll, get down and dirty and bring it all back to the sound that they love. This is a fun listen that features great guitar work, loads of organ goodness, and melodies that leave their mark. They may not look the part but Toy Soldiers sound the part and The Maybe Boys is probably the most unassumingly unhindered awesome blues rock record I've heard in a long, long time.
Posted by Paul POP! at 8:00 PM