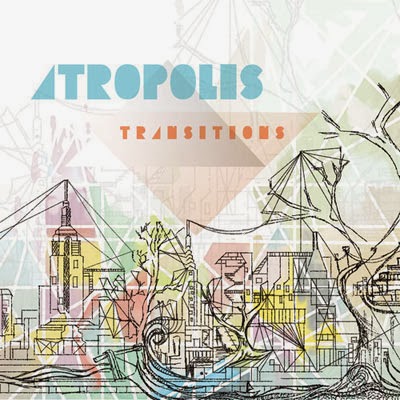 Although from New York Atropolis and being firmly an American collective, this band take a global approach to keeping a dancefloor packed. With hints of cumbria, dub, dubstep, moombahton, and just about anything else with a groove their album Transitions is box fresh but rooted in world music tradition. It’s a pan global exploration of deep grooves, atmospherics, and sound collages that’s far greater than the sum of their parts.

Transitions is an exciting, energetic, and throbby record filled with great basslines that it rides like Kelly Slater does waves. This is the sort of album that it’s simply impossible not to move too. With buildups and comedowns bouncing off each other, modern production and old sounds working with each other and songs that are physically moving Transitions hits all the right notes, no matter where they are from.

In addition to the overwhelming amount of rhythm here, Atropolis has seen fit to allow vocalists from a diverse array of backgrounds to contribute to their already stunning album. These collaborations give the songs on Transitions added depth and emotion. While most people will never have heard any of these guests, trust me when I tell you they only make Atropolis’ songs stronger and more culturally diverse.

Transitions is a fantastic album that is colorful and full of flavor. It’s a diverse record that contains a bevy of electronic and cultural elements that combine forces to create something magical. With winter winding down this is the perfect record to wind it down to; if ever a record had sunshine and warmth written all over it Transitions would be it.
Posted by Paul POP! at 6:38 PM

Email ThisBlogThis!Share to TwitterShare to FacebookShare to Pinterest
Labels: atropolis