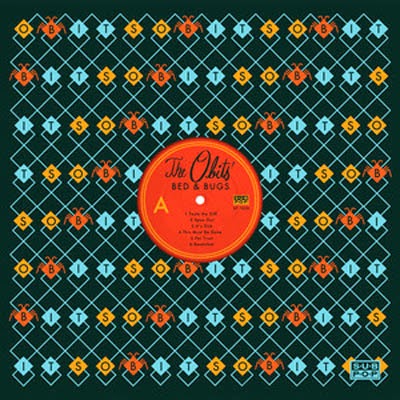 I think if you were to look up rock and roll in the 21st century you’d probably find a picture of Obits next to the Penguin Guide to Music’s definition. These guys are uncomplicated and make no bones about what they do; they play rock and roll and that's it. Their latest album, Bed & Bugs is like a shot of gasoline straight to the heart; aggressive, toxic, but and absolutely amazing rush.

Bed & Bugs is raw and unrefined but doesn't let that hamper it from being quite good. This is post grunge mayhem with Stooges-like tendencies. Simply put Bed & Bugs is raw power (see what I did there??). Screamy vocals, bashed drums, wrangled guitars are all here and they’re powered by a rebellious spirit that got lost in the 50’s and has been trying to find it's way to the 21st century. It’s all very rough and ramshackle and sounds like it might all explode into a million pieces any second; how can you not love a record like that?

Obits are as pure as the driven snow…if that snow was grey and sludgy and covered in black ice. They make a mess out of every song but it works out pretty well and Bed & Bugs is one heck of a good sloppy record. There’s something to be said for guys who just plug in and just go. Obits are just honest and good and they play rock and roll the way it should be…as if every song could be your last. Bed & Bugs ain’t pretty but it is good.
Posted by Paul POP! at 6:55 PM

Email ThisBlogThis!Share to TwitterShare to FacebookShare to Pinterest
Labels: obits