At the Grand Bazaar With Bombay Dub Orchestra 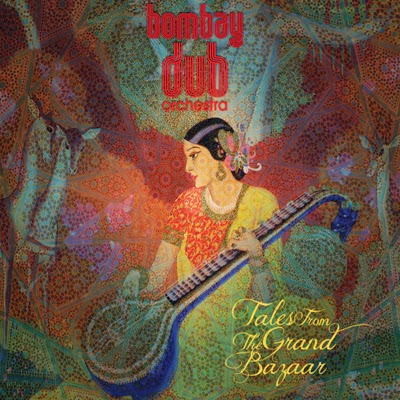 Bombay Dub Orchestra's latest album Tales From the Grand Bazaar is music to align your chakras to; it mystical consciousness expanding music that was created over several years and throughout five countries. Originally started after a trip to Bombay, India ten years ago Andrew T. Mackay & Garry Hughes were so enamored with their experiences and working with Indian orchestras that they decided to pursue their own brand of the same. The result is an album of midtempo electronica dubbed to perfection.

Atmospheric and modern as well as rich and traditional this is the sound of old colliding with new to create beautiful results. Tablas, sitars, and dubbed drum machine beats intermingle in this musical marketplace, hypnotizing listeners and cleansing their souls. Tales From the Grand Bazaar creates a scene, sets the stage and then lets your mind run free within it; Bollywood or pre-colonial India the choice is yours. This is a record as vast as the Sahara and just as gorgeous. Intricate, layered, and filled with an array of sound Tales From the Grand Bazaar is a rich tapestry of influences that meet in the mystical Grand Bazaar like much of the east and west have been doing since 1461.

Tales From the Grand Bazaar is a very visual album and The Bombay Dub Orchestra do a fantastic job at creating the world it lives in. One can almost see and hear the bustle and noise of a busy market and the various experiences in each song. They do such a great job at creating this imaginary world that one would swear you could almost smell and taste the world in which these songs inhabit. Difficult to walk away from Tales From the Grand Bazaar is the kind of record that's relaxing, imaginative, and only gets better with repeated listens. With your imagination set free the Bombay Dub Orchestra takes you on a trip through the ancient and modern streets of the Grand Bazaar and you may never want to leave.
Posted by Paul POP! at 7:45 AM