Scary Cherry and the Bang Bangs Romp Through The 90's 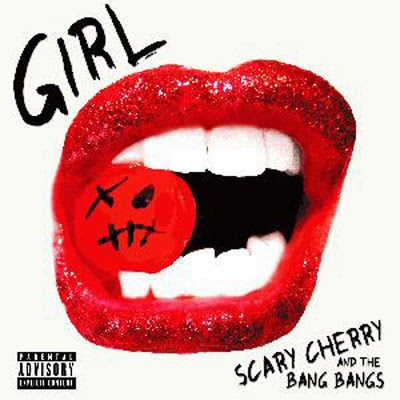 Scary Cherry and the Bang Bangs are a blast from the 20th century rammed straight through to the 21st. This female fronted band smashes pop punk, glam, metal, and hard alternative into something that sounds like it would have been gargantuan circa 1993. Their album, Girl, is a huge affair with gargantuan hooks, upbeat tunes, and a ton of fun.

Scary Cherry looks the part, her band sounds the part and whatever you're thinking about them is exactly what you would expect of a band named Scary Cherry and the Bang Bangs. Slightly over the top in all the best 90's ways the band is sonically the real deal with songs that are big, catchy, and filled with an excess of pop energy they're just about unstoppable. The band seems to have an overabundance of those qualities and it makes for one entertaining album that's a fun throwback to when alternative broke. The whole things feels overly familiar and comfortable in that sort of you already know these songs the first time you hear them way. Girl isn't overly complicated or pretentious, it is, however, a rush of blood to the head and it's the sort of thing that probably translates so well live that it could be dangerous.

They may have stumbled in from the past but they've done it so convincingly well that Scary Cherry and the Bang Bangs will leave you homesick for simpler times. Girl is a campy, lively, and hyperactive romp through every three chord progression you've ever heard. It's not unique or challenging but it doesn't need to be, this is the sort of record that clobbers you over the head with massive hooks and choruses you'll never forget. It's simple but a riot to listen to and there's nothing scary about that!
Posted by Paul POP! at 8:15 PM

Email ThisBlogThis!Share to TwitterShare to FacebookShare to Pinterest
Labels: scary cherry and the bang bangs