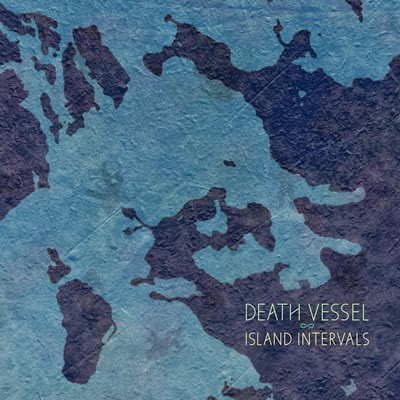 If you were to look up haunted in a musical dictionary I suspect you would find a picture of the aptly named band Death Vessel next to the definition. Far from cheerful this spooky band takes chillwave and folk and a bit of necromancy to come up with something that sounds like a seance with a church chorus. Their album Island Intervals is an ancient and odd sounding record that has a frightening beauty about it that will peak your morbid curiosity while it plays tricks with your ears.

Barely raising a tempo that's traceable, Death Vessel sound like they are on a 33 minute long death march with a series of dirges in tow. Are their songs happy? Are their songs sad? It's hard to say because Island Intervals sounds so emotionally overwrought that it's hard to get a grip around it. The album has got this simplistic beauty about it that comes from the nearly broken vocals of Joel but has this depressing deep resonance to it that just feels like a musical black cloud. Death Vessel have come up with something that's endlessly fascinating because it's so weird, depressing, gloomy and yet utterly gorgeous. With found sounds, ghostlike instrumentation, the occasional catchy bit and a whole lot of strangeness Island Intervals is mesmerizing.

I really enjoyed how Death Vessel have taken gentle sounds and made them sound dark, medieval, and out there. Island Intervals is the strangest folk record ever recorded. It's gothy with out being gothy, it's folky with out being folky, it's chilled out with out being chilled out. It's haunting, bizarre and impossibly addictive. Listening to Island Intervals will leave you wondering what the heck Death Vessel are on about and what the heck they're trying to do. Whatever it is, I'm just glad they're doing it and hope they continue to do so.
Posted by Paul POP! at 9:23 PM