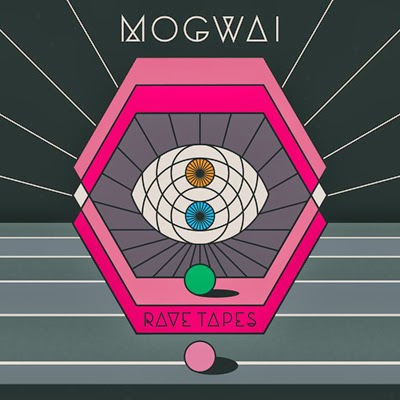 Mogwai are a band I want to hate. Simply put I can't stand the personalities of the people who make up this band; their pretentious dispositions and hatred of fellow musicians are annoying. And yet despite all that it never gets in the way of just how awesome a band Mogwai are. Ego's aside, these guys can play the heck out of a song and their latest album Rave Tapes is proof enough of that.

Rave Tapes is not a seventy minute album of bangers as the name might suggest, but rather an expansive tripped out voyage into a Nagel painting floating in space. Vocoders, keys, droned out riffs, driving beats all mesh together in a web of atmospheric sound collages that could rival anything by a 20th century abstract artist. The songs that make up Rave Tapes could seemingly go on forever in an endless repetition of amazingness and that would be ok. Hypnotic, potentially infinite, and ridiculously beautiful Mogwai in a single album proves that post-rock is as strong as ever. Mogwai have built a record so ensconced in expansiveness and ambiance that even Brian Eno would have to stop and shake his head at.

Rave Tapes is digital. Rave Tapes is analog. Rave Tapes is the future and it sounds amazing. Mogwai have swung for the fences and knocked it out of the yard with this record. It's not often you want to listen to an instrumental record over and over but this one of those occasions. Easily the finest droney album you will come across this year and it's only February; everyone else should just go home now.
Posted by Paul POP! at 8:57 PM

Email ThisBlogThis!Share to TwitterShare to FacebookShare to Pinterest
Labels: mogwai