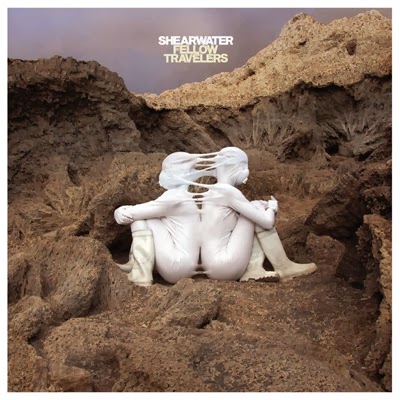 I never jumped on the Shearwater bandwagon when it departed several years ago. I just didn't get it. I didn't understand why the blogspehre was falling over themselves in admiration for what I found to be just another average indie rock band. Then came Fellow Travelers. Wowzers in my trousers, this record totally steamrolled over me. Their previous efforts may have been absolutely lack luster, but this album is mind blowing.

There's just something so emotional about Fellow Travelers that it hits me right square in the heart. For whatever reason what they've constructed here works and works on a large scale. They've gotten epic and stadium anthem-ish like Snow Patrol or something but have maintained this grittiness, this worn down patina that makes it all sound even more emotional. Songs soar and rise up and the guitar sound sparkle across the songs like crests of waves in a vast ocean. This is big emotionally charged stuff that could go huge. And if all that emotionally draining pop wasn't enough they absolutely remake Folk Implosion's, "Natural One," in their own image and nearly destroy the original.

Amazing from start to finish, Fellow Travelers is the sort of record that will leave you in tears. It's a cathartic experience and at times difficult to listen to, but it's expansive and beautiful and hard to let go no matter how difficult in might be to listen to. Fellow Travelers is easily Shearwater's best effort and if ever there was a statement of intent from a band this would be it. Masterful, taxing, and awe inspiring bands like Snow Patrol & Coldplay will have to up their game if they hope to keep up with these guys.
Posted by Paul POP! at 7:39 PM

Email ThisBlogThis!Share to TwitterShare to FacebookShare to Pinterest
Labels: shearwater