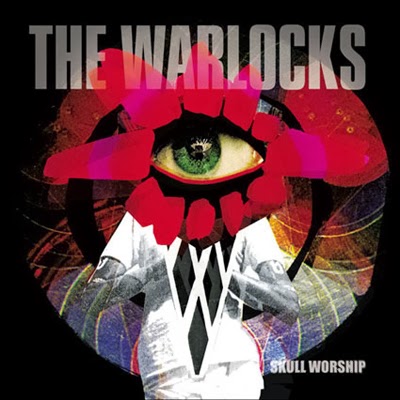 The Warlocks have been kicking around for what seems like eons. Coming to a somewhat high degree of prominence during the rock and roll revival in 2002-2003 the band almost became household names. But as with any scene created by the music press, it didn't last and either did their shot at stardom. Undeterred The Warlocks have carried on for the better part of a decade continually creating amazing jams.

Their latest opus Skull Worship sees the band creating epic psychedelic jams that are lost in the far reaches of the galaxy. This expansive set of songs seem to wander and roam around as reverb pedals and distortion fills every possible musical crevice, all the while drugged out vocals sag along sounding permanently dazed and confused. The result is an album that is so huge in scope, so filled with musical wanderlust, and so ridiculously good our puny human brains can barely comprehend it all. Skull Worship is expansive and infinite and one suspects given enough physical ability and storage space The Warlocks could make the worlds first infinite album. These guys are awesome at what they do and they seemingly do it all with such ease and alien influenced abandon that it's admirable.

Skull Worship may not make The Warlocks household names but it will blow your mind (and ears) away. If you were to look up 21st century prog rock in the Penguin Dictionary of Music, The Warlocks would be next to the definition in a cloud of haze. Massive and nearly incomprehensible Skull Worship is the kind of record Dr. Dre invented Beats headphones for. Tune in & drop out and let The Warlocks take you on a journey between time and space with the Mighty Boosh.
Posted by Paul POP! at 8:37 AM

Email ThisBlogThis!Share to TwitterShare to FacebookShare to Pinterest
Labels: the warlocks